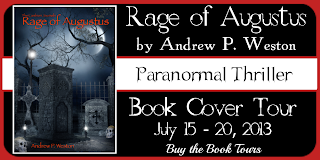 I am excited to have Andrew P. Weston here today for his Book Cover Tour for his new release The Cambion Journals: Rage of Augustus. It sounds like a great Paranormal Thriller read. While I'm going to go buy my copy, feel free to read on all about Andrew and Rage of Augustus!

About The Cambion Journals - Rage of Augustus

They say revenge is a dish best served cold.
Whoever they are, they’ve never met Augustus Thorne.
Born a Cambion—half-demon, half-human—and cursed with a terrible hunger he can barely control, Augustus spends his life hunting and exterminating any Incubi and Succubae he can find. But no matter how many he destroys, he can always find room for one more. Especially if it’s the foul scum who raped his mother, Augustus’s own father, Fanon.
Driven by rage, his quest leads Augustus through the centuries and around the world until fate suddenly hands him his heart’s desire.
But things are not as they appear and the revelations Augustus uncovers are mind boggling. When he finally corners his father in London, events take an unexpected twist.
Is revenge served upon a bed of scalding rage?
Discover the awful truth in Book One of the Cambion Journals: Rage of Augustus.

I waited in the shadows. I was very, very good at that. I had to be considering the prey I was hunting. He was old, he was powerful and his appetites gave him strength way beyond any other foe I’d ever had to face.
It had taken me decades to get close to him and months to track him to North America, because up until now, he was nomadic. The world was his garden—or his dining room, dependent on your view—and he’d always been cautious and restrained in his choice of delicacies. But at last he’d slipped up!
I’d been scouting the internet and scanning coroner’s reports as usual when I noticed a pattern developing here in Los Angeles. Over a period of only six weeks, five apparently healthy young women had simply wasted away and died. Three were married, one was in a steady same-sex relationship, and the other was single. Further digging had revealed all were extremely popular, active and good-looking.
As you know, Los Angeles is a big city. Just scratching the surface a little will reveal all sorts of sordid goings-on and shady dealings that would make your hair curl. So why would these particular deaths stand out?
I specialize in a very particular method of death. When usually vigorous, energetic people simply fade away and die for no reason, it gets my attention. That by itself would have been enough to warrant a visit. But what kept my interest in these cases were the descriptions of the young women involved.
All ranged from their early twenties to mid-thirties and every single one of them was blonde and extremely attractive. And that was what made me get on a plane and travel thousands of miles across the Atlantic within hours of reading the reports, because only one scum-bag I knew of ever restricted his victims to such a narrow profile. Fanon!
As I mentioned, he was getting old now, and they were just his type. For him to select so many similar victims in such a confined area and in such a short period of time was either a huge mistake or it indicated an arrogance that surprised me. I didn’t really care which; I’d wanted to take him for over two hundred years. And can you blame me?
It was because of him I existed. It was because of him I was a monster, a menace to society, cursed with a hunger I could barely control.
Yes, I am what I am because of my accursed father.
I didn’t care how long I had to wait. Soon he’d arrive, and when he did, I’d make sure he paid in full for what he’d done to my mother.


You can find The Cambion Journals: Rage of Augustus over at Amazon, click here.

Andrew P. Weston was born in the city of Birmingham, in the UK and grew up in the towns of Bearwood and Edgbaston. He eventually attended Holly Lodge Grammar School for Boy’s where he was School Captain and Head Boy.
He was an active sportsperson for the school, college and a variety of rugby, martial art, swimming and athletics teams throughout the city.
On graduation in 1977 he joined the Royal Marines fulfilling a number of specialist roles both in the UK and abroad.
In 1985 he became a police officer with the Devon & Cornwall Constabulary, and served in a variety of uniformed and plain clothed departments until his retirement in 2008.
Over those years, he wrote and illustrated a selection of private books for his children regarding the life of a tiny kitten, called, “The Adventures of Willy Whiskers,” gained further qualifications in Law and Religious Studies, was an active member of Mensa and continued to be an active sportsperson, providing lessons free of charge to local communities.
An unfortunate accident received on duty meant Andrew had to retire early from the police force, but after moving to the sunny Greek island of Kos to speed up his recuperation, he was at last able to devote time to the “Guardian Concept” he had developed over his years in the military and police.
When not writing, Andrew enjoys Greek dancing and language lessons, being told what to do by his wife, Annette, and hunting shadows in the dark. He also has a magnificent mustache collection.
Andrew is now contracted to Pagan Writers Press for three books. Fairy Tail, is a short, but dark and gritty erotic paranormal/thriller with a twist. The second book, Guardian Angels is the introductory book to the Guardian Series, a sci-fi action/adventure epic set in the near future. And the latest short story, Blood Moon, is a paranormal action/thriller set in the jungles of South America.