Secrets of Jenkins Bridge on Sale!!

I hope everyone's Thanksgiving was as wonderful and belly stuffed as mine was. Despite our attempt at buying a smaller turkey this year, we still have leftovers. Which isn't a bad thing. It's just enough to make a great turkey soup out of it. The plus is we won't be eating Turkey nearly until Christmas. On the flip side, we have enough pie to get us through the weekend. Again, great because it's yummy but not good for me while I'm losing weight. I guess I will just have to work out twice as hard next week.

For Black Friday and really the entire weekend: if you haven't bought my romantic suspense, Secrets of Jenkins Bridge, now is a great time to snag it. Starting today and going through Sunday, it is only 99 cents. That is $4.00 OFF. 80% OFF retail price!!

If you haven't already signed up for my newsletter, please do. I have a lot going on this coming year that I'm excited about and will be filling my monthly newsletters with the news. If you are already subscribed, I know I haven't sent one out these last couple of months due to holidays and time constraints. Even though those won't go away anytime soon, I have made sure to set time aside to begin sending out my newsletters at the first of every month from now on. December will have glimpses of the year coming up along with a couple of polls I'm hoping you will participate in.

Also, I've added a new page here at Real World on Writing. It's titled Donna's Street Team and it's exactly what the title implies. I'm looking for anyone interested in joining my street team. All the information is on the page here.

And now that it's officially the Christmas season, here's a little excerpt from my Christmas short, The Wishing Wreath, which you can find in Soul Mate Publishing's Anthology All I Want For Christmas Is A Soul Mate on Amazon:

“Why so gloomy all of a sudden? Just a moment ago I saw you blush when our eyes met.” Antoine had suddenly moved to her side and his hand slid down her arm to take hers. Tingling shock waves tickled their way up her arm. Raising it to his lips, he gently kissed the back, while that devilish grin displayed tauntingly across his face.
Vivian curtsied following tradition when in royalties’ company. He didn’t seem to appreciate her action because he jerked her back up. Not hard enough for others to take notice, but she certainly did. Her breathing hitched.
He moved to her ear whispering, “Don’t begin treating me like royalty now, or I may have to bend you over my knee later and punish you . . . thoroughly.”
Yanking her arm free, she pointed a finger at him. “Number one, don’t tell me what to do. I don’t care if you are a Prince. Number two, you couldn’t handle my naughty side.” She curtsied again on shaky legs, and then moved a couple steps back. She hoped he wouldn’t call her bluff, as she’d never done anything naughty. Her heart slammed against her ribs, ready to explode.
The wicked sexiness remained. His eyes sparkled at the challenge. “Ms. Rose, it would be an honor if you would have this dance with me.” His deep, rich voice carried across much of the hall, causing ladies’ heads to turn in their direction. Mumbling began from a group of ladies glaring at her. One in particular shot imaginary daggers in Vivian’s direction. If looks could kill—
She’d like nothing better than to take this man, this delicious specimen . . .
Stop it already!
She stepped toward him and offered her hand. With a wide smile, she responded, “It would be my pleasure.”
The ladies’ envy-filled sneers caused Vivian a little happiness, never having been in the spotlight before. And the one with daggers in her eyes, a porcelain blonde, mouthed something while pointing at her.
Antoine took hold of her hand, pulling her close. He spun her around and lowered his voice. “You are quite the vixen. And you smell heavenly.”
So do you. “Keep sniffing, Prince Beliveau. Because this will be the last time you’ll be this close. Enjoy it while it lasts.”
Antoine eased back. “Don’t count on it, my sweetness.” He tightened his hold on her, drawing her even closer.
His dazzling eyes bore through her soul. She shuddered as a chill climbed her spine, spreading across her bare shoulders. She wasn’t scared of him. Quite the opposite. A part of her wanted to forget his lie, and instead longed for him to whisk her to the barn, pin her down with his naked body, and let him have his way. If only he had been truthful from the beginning . . .

Posted by Donna Shields at 7:57 AM No comments:


Mine is from my paranormal romance suspense, The Swan Cove Murders. My hunky hero, Nicholas, is with my sexy heroine, Lena, in the attic of his parents' home. It has been one year since his brother, also Lena's fiance, Earl, had died violently at the hands of a serial killer. Nicholas has come calling to go through Earl's trunk, like a visit to old memories. She has announced how much Earl had loved coming up to the attic and going through their things.

Nicholas grabbed her wrist, holding her hand closer, catching a whiff of her sweet scent. He turned his head, placing a kiss in the middle of her palm and heard the heavy sigh escape her lips. He spotted the mixed emotions parage across her face. The scent of her strawberry lip gloss mixing with her lilac perfume made his head spin. He loved this woman, but Earl had professed his love for her first. Nicholas would have never battled his brother to win her heart. 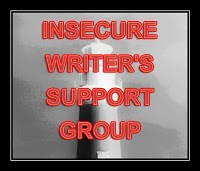 
I haven't posted in a couple months due to crazy schedules, new grandbabies, work overload and squeezing in time for my writing. This month I truly don't have any insecurities.

Instead, how about some words of encouragement for all who are struggling this month?


"Whatever you do, or dream you can, begin it. Boldness has genius and power and magic in it."
- Johann Wolfgang von Goethe

“Talent is cheaper than table salt. What separates the talented individual from the successful one is a lot of hard work.”
- Stephen King

Release Day: All I Want For Christmas Is A Soul Mate: Soul Mate Publishing's Anthology 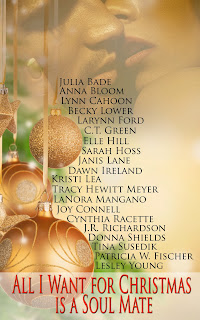 As everyone begins to gear up for the upcoming holidays, Soul Mate Publishing is too. For the second year in a row, SMP is bringing you a wonderful, heart-warming collection of romantic Christmas stories from twenty of their authors, me included. Who doesn't like a little romance mixed with a sprinkle of Christmas magic to get them in the holiday mood? This anthology is jam packed!!

Here is the line up:


When a handsome courier shows up at Christy's door to serve her with a lawsuit, he finds the woman of his happily-ever-after, but this single mom isn't ready or willing to give her heart away again . . .

Jude gave up on Christmas last year when her husband walked out, but anything could happen this holiday season, thanks to a new man and a Christmas miracle . . .

Two strangers, each starting a new life, realize that visiting Santa really is about Christmas magic . . .

Even in paradise, the ghosts of Christmas past can spoil the view of decorated palm trees and warm coves . . .

I’m glad I put a hot, naked guy on my Christmas wish list, but I didn’t think Santa would actually deliver one . . .

Killed the night before their wedding, a ghostly groom finds a way to return from the dead to be with his true love . . .

Encountering a scorching hot elf wasn’t at the top of this SERA agent’s Christmas list . . .

Hunter Jade's assignment to guard the new guy turns into a life-and-death food fight, sparking romance among the rutabagas . . .


Sarah Hoss: Forever In My Heart

Pledged to each other and eagerly awaiting a Christmas wedding, a young couple discovers Fate may have other plans . . .


Dawn Ireland: A Highlander For Christmas

Legend has it that if the need is great enough, and the hearts pure, the magic of Christmas will guide the way, crossing all barriers to help two lost souls become one. Such was the case on this Christmas Eve . . .

While celebrating the birth of the Christ Child, a man and a woman are given a second chance at love, but will they find the courage to take what is so freely offered?

A lake-effect blizzard, a woman’s efforts to spice up her marriage and the husband who’s content with their current marital status quo makes for a Christmas Eve neither will ever forget . . .

Two old friends find they have more in common than a Christmas birthday as they reunite after twenty years apart . . .

On a lonely and desperate Christmas Eve, Cami Monroe receives an unexpected gift that will change her holiday, and her future, forever . . .


Cynthia Racette: A Child Is Born

Two teens, assisting with a church Christmas pageant, discover the true meaning of the season through their own Christmas miracle . . .

Crystal Springfield is looking forward to the quiet solitude her cabin in the mountains offers for the Christmas holiday, until ‘Tall, Dark and Lost’ shows up at her door . . .

A second chance at love is only a single Christmas Wish away . . .


Tina Susedik: A Year And A Day

A year after her husband's death, will a widow find love again?

An alien teaches his human captor a lesson in the real meaning of goodwill . . .

This anthology is exclusively on Amazon and is only $2.99. Now that's a GREAT deal. And it would make the perfect gift for your loving reader. Buy here. I promise you won't be disappointed.