My seven is from All I Want For Christmas Is A Soul Mate (The Wishing Wreath). 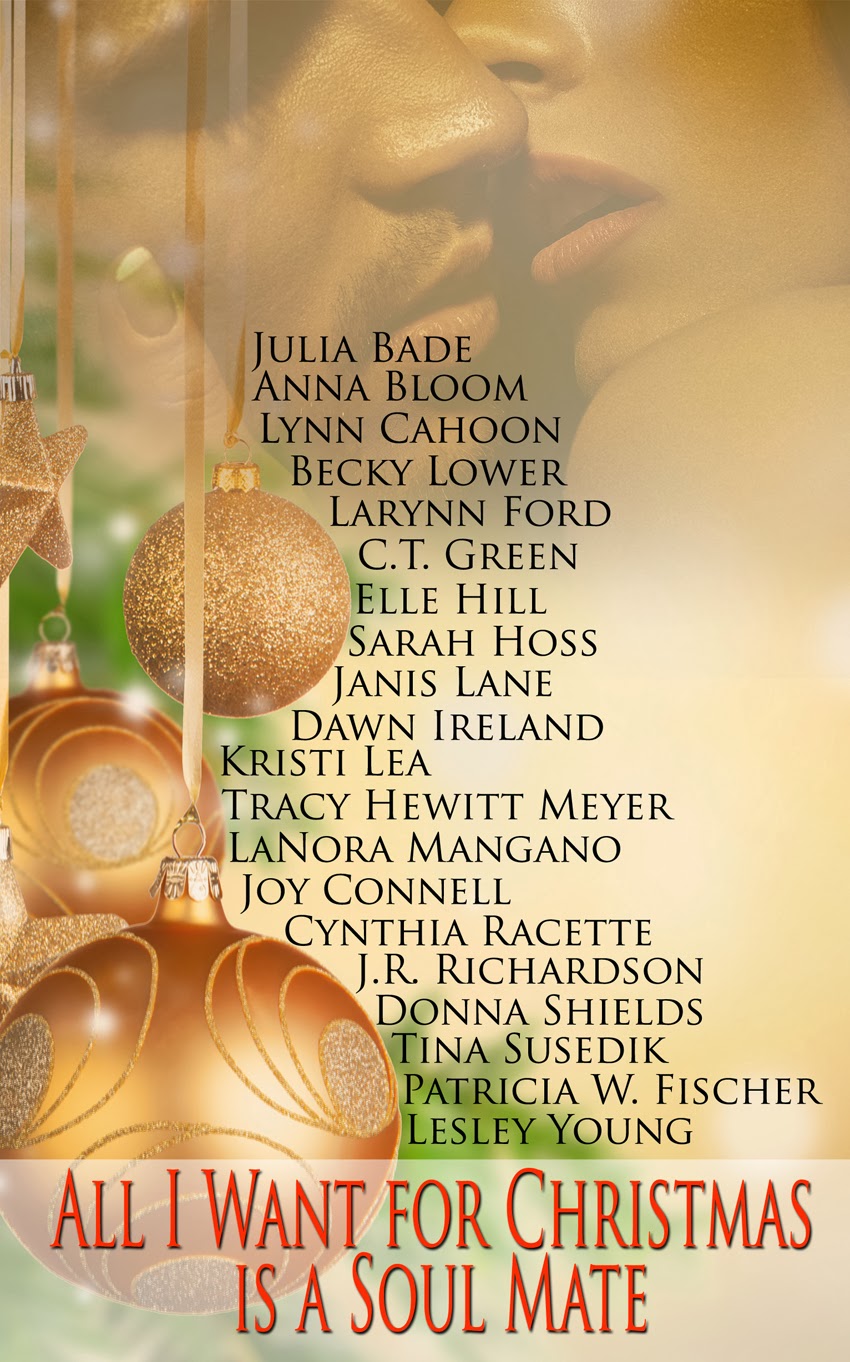 And in that moment, as if some magical wand had been waved over them, she simply knew she couldn't leave. Could it have been the wreath? She choked out, "Do you really love me?"

He sighed, "Of course. If you leave, I swear I'll give up my crown and chase you to the ends of the earth, begging and pleading until you'll finally have me."

Vivian couldn't believe her ears. "You would give up your kingdom?"

Caridad Pinerio: Her new release, Born To Love and a Giveaway!! 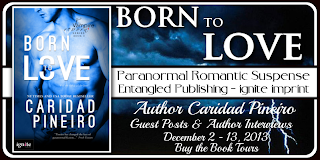 I am pleased to have Paranormal Romantic Suspense author Caridad Pineiro here with her new release, Born To Love. And I have to say this one sounds like a winner to me. During her tour, she is giving away a $25 Amazon or Barnes & Noble gift card along with a Vampire Reborn T-Shirt. So be sure to enter after reading all about Born To Love.

Here are the buy links: 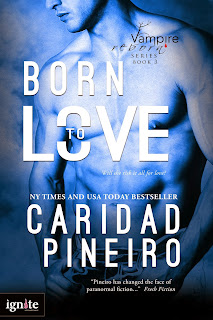 Fated to survive…
FBI agent David Harris’s life nearly came to an end during a botched raid. Though he survived, his body and spirit were broken by the perilous underworld he believes his estranged partner, Diana Reyes, has embraced with her Vampire husband. Now, left to a life in a wheelchair, David is angry, distrustful, and withdrawn…
Meant to love…
Seeing her former lover, David, again rekindles feelings long forgotten for Maggie Gonzalez. But she’s been thrown into a terrifying future as a werewolf, threatening to destroy what they might have again.
Destined to die…
Diana Reyes has lived on the edge since her blood contamination by Vampire Ryder Latimer. Her unexpected pregnancy is putting a huge strain on her body, but she’ll do anything to help right the wrongs of the past and help her former partner find happiness…even if it’s in the arms of a werewolf.

Here is an excerpt:


The Big Day
Manhattan, New York
FBI Agent Diana Reyes had faced down serial killers, terrorists, and drug-crazed vampires, but nothing scared her as much as what she was about to do.

She was getting married.

And she was pregnant.

She didn’t know which of the three worried her the most.

Each presented its own problems. Each was scarier than virtually anything she had ever encountered. All those other things could only kill her…and almost had at one time or another.

But these three could break her heart, and that was a much more enduring pain to live with.

Briefly, she considered turning away from the French doors leading onto the penthouse balcony where the wedding ceremony was about to take place. The balcony was as long as the city block and about a quarter as wide with plenty of room for the three dozen or so chairs filled with friends and family waiting for her to begin her walk to meet the love of her life.

She gave a heartfelt sigh and peered past the rows to search for her future husband.

He stood near the far wall of the balcony, lethally handsome. The black of his tuxedo emphasized his dark hair and eyes—fathomless eyes filled with both love and guilt. The fabric was perfectly fitted, accenting broad shoulders she’d leaned on more than once.

He was so many things to her. Lover. Friend. Soon her husband…and that thought filled her heart with emotion so strong, it nearly stole her breath.

Just behind Ryder stood an arch decorated with flowers in pale shades of blue, lavender, and white. They matched the heavy, fragrant bouquet in her hands and the bunches of flowers at the end of each makeshift row of chairs. At a far corner of the balcony, a chamber music quartet played softly.

Ryder had spared no expense to make this day special for her. Even now, a crew of caterers was at work in the kitchen, preparing an array of dishes for the reception right after their nuptials.

Diana placed a hand over her midsection as her stomach knotted at the thought of eating and threatened to revolt. In the month since discovering she was pregnant, her bouts of nausea had abated only slightly. She’d hoped they would hold off on such a special night so she wouldn’t embarrass herself.

“Cold feet?” her brother Sebastian asked at her hesitation, and reassuringly squeezed the arm she had tucked through his for her impending walk down the aisle.

“Maybe,” she forced out past the giant lump in her throat. She shot a cautious look at her brother and found him smiling indulgently.

“Even though I’ve had my doubts at times, Di, I know this is the right thing for you to do.”

“Maybe you should be the one walking down the aisle to get married,” she said. Then she chuckled and added, “You’re right. I’m just being stupid.”

Sure, because your average bride was pregnant with a vampire’s baby and about to marry him. Totally typical.

Before she could reply, he continued, “Besides, if I have to shave, get a haircut, and endure this monkey suit, the least you can do is go through with it.” He raised his hand to signal the string quartet that they were ready.
The head musician wound down the piece they were playing, and the lush and melodic strains of Pachelbel’s Canon swelled into the night air, inviting her to action. But it wasn’t until her gaze connected with Ryder’s across the distance that she boldly took the first step.

And finally admitted that, as scary as it all was, she wanted to be Ryder’s wife and have his baby.

New York Times and USA Today bestselling paranormal and romantic suspense author Caridad Pineiro wrote her first novel in the fifth grade when her teacher assigned a project – to write a book for a class lending library. Bitten by the writing bug, Caridad continued with her passion for the written word through high school, college and law school. In 1999, Caridad’s first novel was released and over a decade later, Caridad is the author of almost forty published novels and novellas. When not writing, Caridad is an attorney, wife and mother to an aspiring writer and fashionista.

Where you can find Caridad:

And don't forget about her giveaway!

Enter below in the Rafflecopter:


a Rafflecopter giveaway
Posted by Donna Shields at 3:00 AM 1 comment:


This time I'm using my 7 from my Christmas short, The Wishing Wreath, a part of Soul Mate Publishing's Anthology All I Want For Christmas Is A Soul Mate.


He tightened his hold on her, drawing her even closer.

His dazzling eyes bore through her soul. She shuddered as a chill climbed her spine, spreading across her bare shoulders. She wasn’t scared of him. Quite the opposite. A part of her wanted to forget his lie, and instead longed for him to whisk her to the barn, pin her down with his naked body, and let him have his way. If only he had been truthful from the beginning . . . 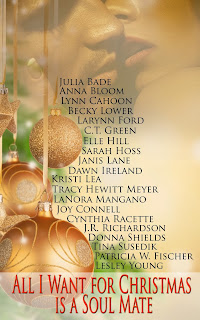 This year’s delightful collection of Christmas short stories features a multitude of romantic genres all with one common theme: during the holiday season, nothing’s better than spending it with the one you love.

Twenty talented Soul Mate authors have put together an anthology that’s sure to please any reader who enjoys their romance with a splash of Christmas cheer:
A time-traveling Highlander brings comfort and joy to a young woman grieving her lost family . . .
Best friends, both widowed, suddenly see each other through new eyes during a snowed-in Christmas Eve;
A royal prince and a commoner fall in love despite their differences and a handful of untruths, thanks to a wreath that grants wishes . . .
An alien race understands the simple reward of giving, when their human captive does not . . .
Young lovers planning a Christmas wedding find their promise to each other is put to the ultimate test . . .
A ghostly groom refuses to stay away from the woman he loves . . .
For two modern believers, a magical, mystical visit to Bethlehem on the night of the Christ Child’s birth is both a joy and a responsibility . . .
And many more heartwarming, romantic stories celebrating ‘The Season To Be Jolly.’


All I Want For Christmas Is A Soul Mate is available at Amazon $2.99