This weekend I wanted to post early as there is some major catching up that I need to do around the house and with my writing and other commitments.

There are lots of updates.

Over at SMP Authors Group Blog, we have a winner for November's giveaway. Congrats to Viola Cross!!!
Head over there this month for a Kindle giveaway. Click here to get the details. Seriously, who wouldn't enter?

Kira Taye's His Treasure is now out at Breathless Press

In a time when men ruled their households with firm hands, can a quiet man tame his rebellious wife with persevering love?
Angry at being forced to marry a man not of her choosing, Adaku stubbornly shuns her new husband on their wedding night. However, she soon discovers there are worse things than giving into a man whose touch awakens her deep desires. In a land where fruitfulness is celebrated, she could soon be labeled a barren woman.
Obinna knows there are several ways to tame a rebellious woman. Patience and perseverance are two of them. Adaku is his treasure and he will never let her go. When her fears push her into his arms, will he be able to convince her to stay with him forever by unleashing the passion within her?

Nash was bound to Sienna completely – by a blood connection and a deep desire. An Enforcer for the Supranormal community, he was obligated to protect his sexy assignment, despite her family devastating his world.
After being betrayed, Sienna falls into the arms of her surly protector; a demon with a secret of his own. But can she face her destiny knowing she's more dangerous than those Nash was protecting her from?

Guthrie, Oklahoma, 1906
History teacher Ellie Henderson, has been a thorn in High School Principal Max Colbert’s side ever since he took over three months ago. When she’s not flying by his office, late for her class, with books and papers jumbled in her arms, she’s attending Suffragettes meetings against his orders.
Because of her family connections, Max can’t fire her, but he can certainly find someone to marry her, and keep her busy in the kitchen--and far away from his school. Max soon finds that what seemed like a good idea can turn into disaster when Miss Ellie Henderson is involved. The woman is a master at getting into trouble.
With the Christmas season in full swing, he has many opportunities to introduce her to prospective husbands. However, he gets the uncomfortable feeling that no one is worthy of the minx...

Got my bookmarks and I must say they came out wonderful. In case anyone forgot, here's a pic:

Got them made at IPrint.com. They are inexpensive and do such a fabulous job!!!

And my grandson (my monkey :) ) is doing better. He's still in NICU, but is now 5lbs 1 oz. And in the next couple of days he will finally be in a regular crib instead of the incubator. Fingers crossed that he is home by Christmas. Here he is: 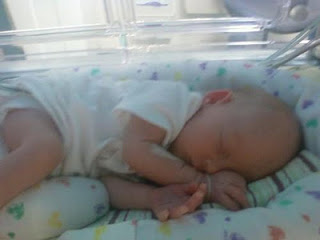 And a shout out to all of you who follow me. Thank you.