I started writing Secrets of Jenkins Bridge back in 2007. This book has traveled a long road. The lessons learned along the way helped improved my writing also. It was a rough go though. When they say you learn to grow some tough skin in this business, it is no lie. Here goes my journey with this book.

I finished it in 2008. I loved the story. Absolutely loved it. I thought without a doubt someone else would too. So, I sent queries out to the major publishers and a few literary agents…and waited…and waited. FYI, when you are told you should write the next story while waiting, do it. I didn’t and I drove myself insane waiting around. Finally, after about 3 months, the letters began to flow in. “Thank you for looking to us. However, Katherine and Mitchell’s story isn’t what we are looking for presently.” That was the basic spin. And as each one came, my heart and confidence sank lower.

Then one letter came that was not the typical form letter. It came from a major publisher, and she went into detail why this story just didn’t work. It was convoluted and Mitchell came off too aggressive/brash. Katherine was too wimpy. There were a few other things. The letter broke me. Really broke me. I boxed it and all the drafts up and put it away. My husband did not know I was writing. I was embarrassed to show him any of this. I felt like such a failure.

I did the worst thing a writer can do at that point. I stopped writing. I was so hurt that no one liked my story. Remember at this time there wasn’t really any self-publishing going on. Traditional publishing houses had been the way. I felt the story was dead in the water.

It took another 3 years before I jumped back in. In 2011 found Savvy Authors, a great place online that offers all kinds of writing workshops for a decent price. And I found that I needed to change my story a little. Not the basic storyline. But some work on the characters and in my delivery of the story. In the meantime, I took to Savvy Authors Summer Symposium which was like the writing conferences but online. I had another story that needed writing and used one of their earlier 30 days to finished classes to write it. And in the Symposium, smaller publishing companies were beginning to pop up and a few joined in on one of their pitching sessions. I pitched the story, The Swan Cove Murders. Soul Mate Publishing was about to open their doors and Debbie wanted my story to be one of the first when the company went live the following month.

She believed in me when I no longer believed in myself. Once that book was released, I sent her my revised story for Secrets of Jenkins Bridge. I received a response within hours that she wanted to publish it. This gave me more confidence in my writing and my stories. It was published in 2012. Since then, my rights were reverted to me at the end of last year. And I have taken on the journey of self-publishing.

I share this journey for those that want to give up and shelve their stories. Please don’t do that. Maybe set them aside for a time but do not stop writing. Do not stop learning. There are a ton of outlets now. And I never stop learning. I take all the classes I can and read all I can. I find the more I write, the more I am finding my voice. 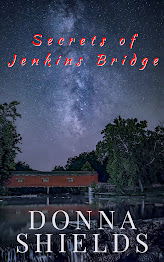