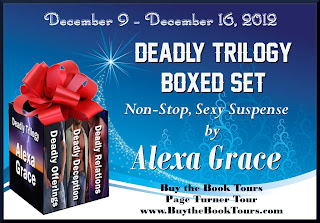 I'm so excited to be one of Alexa Grace's stops along her Deadly Trilogy Boxed Set Tour. 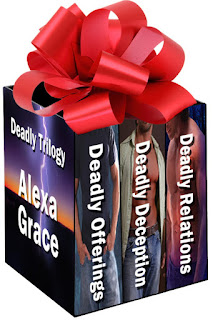 Here are the blurbs for trilogy books:

From bestselling new author Alexa Grace, The Deadly Trilogy, three books with non-stop suspense and a healthy dose of toe-curling passion will have you holding your breath from the first page to the last.

Deadly Offerings - Book One - Anne Mason thinks she’ll be safe living in the Midwest living on a wind farm left to her by her ex's mother. She may be dead wrong. Someone is dumping bodies in her corn field and telling Anne they are gifts—for her! And how can she be falling in love with the hot attorney who represented her ex-husband in their divorce proceedings?

Deadly Deception - Book Two- Enter the disturbing world of illegal adoptions, baby trafficking and murder with new detective Lane Hansen and private investigator Frankie Douglas. Going undercover as husband and wife, Lane and Frankie struggle to keep their relationship strictly professional as their sizzling passion threatens to burn out of control. Can they keep passion in control long enough to take down two murderers?

Deadly Relations - Book Three - Detective Jennifer Brennan, still haunted by her abduction five years before, devotes her life to serve and protect others. Love is the last thing on her mind, but will it find her after three young women go missing and are found murdered on her watch and she vows to find the killer — or die trying.

“Lane, I know you’re ready to do undercover work, but with this case I need two cops who can pose as a married couple. Unfortunately, we’ve got three women on the team. One is built like a linebacker and the other two are pregnant."

“Sir, for this case, why don’t we go outside the department? I know a Private Investigator who can handle herself on a job like this."

“Frankie Douglas. I worked with her last year on the Charles Beatty serial killer case. She’s a former sharpshooter for the Army.”

“Is this the same Frankie Douglas you shot?”
Lane’s face flushed with the guilt he still felt about the shooting.
“Yes, sir. It was an accident. We were heading down the stairs of Beatty’s cellar to apprehend him when one of the steps gave way and when I fell my gun went off and hit Frankie.”

“I heard she’s a former detective.”

“I think I’ve heard about her. Isn’t she a pretty tall blonde woman?”

“Is that right? Do you have a personal thing going with Ms. Douglas?”

“No sir. Strictly professional.” Of course, if he’d had a chance, he’d have made in personal in 2.5 seconds.

Brennan glared at Lane then picked up his phone and dialed a number. “Hello, Frankie, this is Uncle Tim. I may have a job for you. Would you please drop by my office?”

Here's where you can find Alexa: 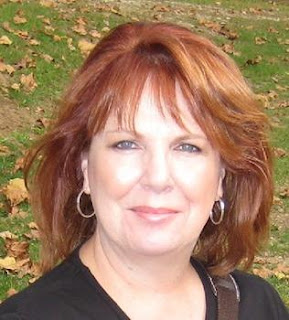 Alexa Grace's journey started in March 2011 when the Sr. Director of Training & Development position she'd held for thirteen years was eliminated. A door closed but another one opened. She finally had the time to pursue her dream of writing books -- her dream since childhood. Her focus is now on writing riveting romantic suspense novels.

Alexa earned two degrees from Indiana State University and currently lives in Florida. She's a member of Romance Writers of America (national) as well as the Florida Chapter.
Alexa Grace is listed in the top ten of Amazon's Top 100 Most Popular Authors in the categories Romantic Suspense and Police Procedural. She was recently named one of the top 100 Indie authors by Kindle Review. A chapter is devoted to her in the book Interviews with Indie Authors by C. Ridgway and T. Ridgway. Her books Deadly Offerings, Deadly Deception, and Deadly Relations have consistently been listed in the top ten of Amazon's Top 100 Bestselling Romantic Suspense and Police Procedural Books. All three books are available in Alexa Grace's Deadly Trilogy boxed set.

Her writing support team includes five Miniature Schnauzers, three of which are rescues. As a writer, she is fueled by Starbucks lattes, chocolate and emails from readers.

Profile of Evil, the first book of the Profile Trilogy will be available in spring 2013.
Posted by Donna Shields at 10:11 AM