Meet Amy Burgess and her book, Inside Out 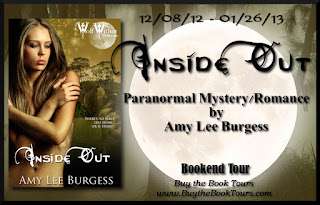 Media Page - An Amazon gift card of $15 will be awarded to one lucky commenter from
our Media Page at the end of the 8 week book tour.

Why I Write About Wolf Shifters

When I was eight years old my Brownie troop went to a children’s museum to see a film about wolves.  I sat in the dark, entranced, as we followed in the paw prints of a pack of wolves for a season in their lives.

When the lights came up, there were gasps across the auditorium, starting from the back.  Gasps of fear and wonder.  I craned my neck and saw a beautiful white wolf calmly walking down the center aisle. She was leashed, which made me a little sad, but the wolf seemed perfectly at ease and happy.

The next aisle over a gorgeous grey wolf was also heading for the front of the auditorium.  What was this?  Were these wolves from the film?  I had a million questions but they all went away when I realized with joy that we were all to line up so we could, one by one, pet a wolf.  I could touch one!

When it was my turn and I looked in the white wolf’s eyes, we had a perfect exchange.  She was so beautiful and so different from my dog, Tansy.  As if she were conferring a favor to allow me to pet her versus Tansy who begged for attention.  I loved my dog, don’t get me wrong, but this wolf was something different.  A wildness glowed from within in her that made me wonder if she ever longed to run through the snow in the woods or drink from a cold mountain stream and sleep in stone cave.  Yet she seemed very pleased to be surrounded by little children in a small auditorium in Connecticut.  The dichotomy puzzled me.

Fast forward a few years and picture me at my keyboard on November 1st.   During the month of November many writers band together and enter NaNoWriMo – National Novel Writing Month.  The goal is to write 50,000 words by November 30th and have the start of a novel.

My dilemma has never been word count. I can happily pound out 1,000 words in an hour if I let myself go.  My problem, up until that particular November 1st, was reining myself in and finishing a novel that wasn’t Stephen King or Anne Rice –like in length.

I’d decided my next step was to write a novel and submit it for publication and the guidelines I’d been reading for various small publishing houses put the upper limit of word count around 100,000.  The novel I had been writing before November 1st, wasn’t even halfway through and already stood at close to 200,000 words.

So my goal was to finish a novel in under 100,000 words during NaNoWriMo and then to submit it for publication.

When I sat before my keyboard, I saw that white wolf from so long ago.  Shifters, I decided.  I would write about wolf shifters.

The night before I’d lain tossing and turning trying to envision a plot or a character – something to start with.  All I’d gotten was a blond woman named Stanzie.  I didn’t know who she was.  What kind of a name is Stanzie? I asked myself as I stared at the keyboard at 5 a.m. on November 1st.   Maybe it’s a nickname?  Constanza perhaps?  No.  That sounds like she’s Italian and she’s blond.  Plus I know I want her to live in New England.  Now I also know she’s a wolf shifter.  How about Constance?  That’s a nice New England name.

Many of my novels start off with a dream sequence and the beginning of Stanzie’s journey is no different.  The strangest thing about Stanzie’s dream is that it was her wolf’s dream, not hers.

And her wolf’s voice and grasp of the world was very childlike.  Where did that come from?  I didn’t know, but I ran with it.

Four novels later, Inside Out, is a tale about Stanzie’s wolf.  Each novel in The Wolf Within series is about her wolf. Because her wolf is different than the others.  Stanzie wants her wolf to grow up, but the journey is long and bitterly hard.   Stanzie is a woman in her thirties who acts her age, but when she shifts, her wolf is a complex child.  At first she reveled in that, but then it became frustrating.  How she handles her dilemma is a running theme.

If you were a wolf, what would you discover about yourself?  That phrase is in the back of my head for every Stanzie novel I write.

Oh, Stanzie’s wolf is not white by the way.  Very light grey, almost white, but not quite.  But there is a white wolf in the series. One of my favorite supporting characters in fact.  If my white wolf of long ago could have shifted into a woman, I wonder if she would have resembled this character at all?  Maybe.

If you want to go on Stanzie’s journey, start at the beginning with Beneath the Skin and hopefully you’ll follow along until you come to Inside Out, her latest adventure.

I also hope you’ll want to come along and see what happens in her fifth book, About Face, which is due out from Lyrical Press in spring 2013.

Here’s a handy link to the series where you can read excerpts and find buy links if you like what you read:  http://lyricalpress.com/category/series/wolf-within

Please also drop by my blog:  The Wolf Within

I’d love to hear from you either @amyleeburgess on Twitter or via email at amyleeburgess99@gmail.com 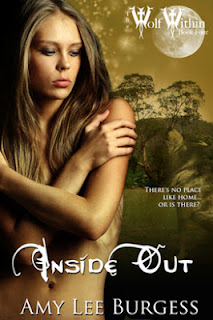 When Stanzie is asked to investigate her birth pack- Mayflower--she isn't prepared for what she finds.

No one respects the Alphas and the newest adult member of the pack is being encouraged to leave. Why? To make matters worse, the men are dangerously intent on mating and shifting with her.

How far will the pack she thought she knew go to get what they want? Without her bond-mate, Liam, Stanzie must face this alone and, barely ahead of threat of violence, must solve the mysteries, and fast.

Here is an excerpt of Inside Out:
Alan looked at me and panic flooded his silver blue eyes. “Stanzie.” My name was a horrified plea.

I could see the ghost of a wolf’s muzzle beneath his mouth. He held out a hand and recoiled when he saw the dark fur on his palm.

“Take off your clothes, Alan,” I urged, but he stood there, transfixed. I hastily unbuttoned his plaid shirt and pushed it off his shoulders. “Help me,” I cried as I tugged at his sleeve.

“I don’t know what’s happening to me,” he whispered. His body gave a bone crunching shudder and he stared at Faith and Scott’s wolves, terror etched across his face. The wolves waited together, shoulder to shoulder. It was a damn good thing I hadn’t shifted myself. Poor Alan was clueless.

I fumbled with the button on his fly and then the zipper. His throat rippled and he threw back his head and howled. The noise nearly scared the shit out of me, but I somehow managed to get his zipper down and then I pushed him onto his ass so I could pull his jeans off. He was no help at all, caught in the throes of the first emergence of his wolf. His body morphed in and out of focus. It was like trying to undress someone by strobe light and I had to shut my eyes so I wouldn’t lose my concentration. Alan whimpered and whined. Shifting was painful sometimes--especially when we fought it and he was. He didn’t know how to relax into the chaos and let it flow. He still struggled for control, for a way to reason out the process, and that was impossible. Shifting did not make sense. It just happened.

“Let go. Alan, just go with it,” I coached in a quiet voice as I sat as near as I could to him. He writhed on the pine needles and screamed as his bones shifted beneath his skin. “It hurts less if you just let go.”

“Stanzie!” My name turned into an anguished howl and just when I had begun to get scared, it happened. Alan blinked out of this plane and when he blinked back in, he was shifted.

His wolf was gorgeous. Dusky black with ice-blue eyes. A touch of gray at the tips of each paw. Big too. Bigger than Scott’s gray wolf. He rolled to his feet and sprawled onto his face when he tried to walk. Two legs to four was a bitch for some people. It had never fazed me, but Grey told me it had taken him half an hour to figure out how the hell to walk the first time he’d shifted. I grinned to remember the story and reached out to pat Alan’s wolf on the head. He whined at me.

“Get up and walk. Four legs are fun,” I told him. I was on my hands and knees now, so we could look eye to eye. If he got up, that is. Faith’s wolf pranced over and nudged him with her dainty muzzle. He whined again and she gave a coughing bark. In wolf speak she told him to get off his ass.

Scott’s wolf approached me and stared at me so hard I knew he tried to tell me something, but I couldn’t figure out what. Then it hit me. Duh. I was still in human form.

I stood up so I could strip off my jeans and t-shirt. Scott’s wolf waited impatiently. Alan’s wolf had gained his wobbly feet but seemed stuck in one position. When Faith’s wolf nudged his back end with her nose, he promptly fell over again and I snickered. Alan’s wolf gave me a reproachful look and I patted his head in apology. Scott’s wolf moved behind me and bumped the back of my knees so hard I fell over. Alan’s wolf wheezed with lupine laughter. “At least I can walk on all fours,” I muttered. Naked, I crawled away a few feet to give myself space for shifting. Only nothing happened.

And of course the links to where you can buy this exciting paranormal: 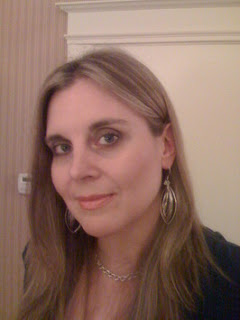 Amy Lee Burgess wrote her first ghost story at age ten. Born in New England, she has also lived in New Orleans and Houston, survived fires, floods, hurricanes, divorce and the premature cancellation of several of her favorite television shows. Turning her back on such shocking betrayals, she is now writing about ghosts, vampires, and other paranormal things and is much happier for it.


You can find Amy: